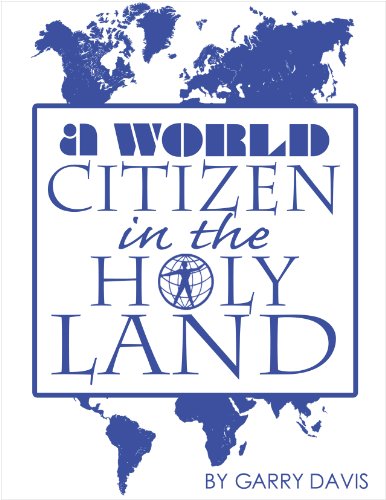 Garry Davis' goal in 1976 were the holy sites in what is now called "Israel"-churches, synagogues, temples, mosques, shrines-which he considered "God's territory" on planet earth and could only be protected by World Law and not warring nation-states.
To that end he flew to the "Holy Land" first identified only by his World Passport and was refused entry at Ben Gurion airport by Israeli immigration on the pretext that he issued the passport "to Israel's enemies." Returning months later with a stateless travel document issued by the French government, he was admitted without question.
With WSA agent Toma Schick he proceeded to the place equidistant to the Wailing Wall, the Mosque of the Dome and the Church of the Holy Sepulcher, displayed the World Flag and declared the sites "world territory under the protection of the World Government of World Citizens."
Davis met the mayors of Palestinian towns, Ramallah, Halhul, Gaza City, and Bethleham proposing "mondialization" to them. In Haifa, he visited the Baha'i Tabernacle of Unity lunching with a member of the Universal House of Justice.
His attempt to depart from Israel to Jordan via the Allenby Bridge resulted in being stuck in the middle of the bridge-on the line between the two countries- his passport rejected by both countries. Facing Both Jordanian and Israeli soldiers,he declared the line "world territory" and inviolate by both countries.
Dedicated to his brother, Meyer Davis, Jr., who died in WWII, the 42-page booklet reveals the real meaning of the ancient land of the prophets, that the world is one and humanity's home, ironically taught in ancient religious texts, Jewish, Christian and Islamic.